Who’s addicted in Shasta County and what are their options? Experts want to fill you in on both

Home/Education/Who’s addicted in Shasta County and what are their options? Experts want to fill you in on both
Previous Next

Who’s addicted in Shasta County and what are their options? Experts want to fill you in on both

Once the film is over next week, the audience will be asked a question. Judy Salter will be one of the ones raising her hand, “Yes.”

After all, Salter is one of the founders of the Women’s Fund, the advocacy group that’s hosting the screening event at the Cascade Theatre October 8.

Indeed, like so many other North State residents, Salter’s answer is affirmative when someone asks her: Has your life been impacted by addiction?

“There’s so many people I know who have been touched or who have been felled by addiction of some sort,” said Salter, whose daughter is a recovering addict. “My kids grew up in a good home, sang in the church choir, everything else. And I think that’s important, because I think we tend to forget that these people have mothers and fathers somewhere.”

The film Salter’s group is showing, “There but for the Grace of God,” will share those personal stories of opioid addicts. The product of Seattle’s KOMO news, it’s a follow-up to the station’s controversial “Seattle Is Dying” documentary on opioid addiction. Doors open at 5:30 p.m. and the screening, which is sponsored by the Record Searchlight, starts at 6 p.m. Admission is free.

While Salter wants to bring attention to the human face of addiction, she said the Women’s Fund also hopes to educate people on resources in the community that can turn users’ lives around. That’s why after the screening is over, a panel of experts — including doctors, law enforcement and health administrators — will address the roots of addiction and the treatments that have been proven most effective.

“I could not find help when my daughter was falling apart, and a lot of these options weren’t even available then,” Salter said. “Our community is just not sitting here watching this happen. Our community is coming together to make sure that solid, effective treatments are available.”

One of the panelists is Dr. Greg Greenberg, who works at both major hospitals in Redding and is also board-certified in addiction medicine.

Parts of the Midwest and East Coast might be considered ground zero for the opioid crisis, but Greenberg said the Redding area has its own growing epidemic.

“It’s not just perception. We definitely have a much bigger problem (than other areas of California),” he said.

Recent numbers from Shasta County Public Health and the Washington Post’s opioid database bear that out. The Post’s data showed that Shasta County had more opioid pills per capita than almost anywhere in the country at one point in the past decade, while county data show admission to treatment programs for heroin addiction has skyrocketed in recent years.

There are many factors behind the opioid crisis, but in California, Greenberg said a policy that was meant to help patients turned out to be part of the problem.

About 15 years ago, the state started making doctors do special training on pain, and that included tenets on believing patients who wanted a prescription, Greenberg said. At the same time, the government started tying payment to doctors with patient satisfaction.

“There was a big push where people were being pressured to prescribe,” Greenberg said. “A lot of doctors didn’t like confrontation and would just kind of give in to patients.”

On top of that, pharmaceutical companies were spreading misleading information about the addiction risks of their products and heroin was getting cheaper. Add in the genetic predisposition some people have toward addiction and regional factors like poverty, past abuse and unemployment, and some people end up turning to substances to cope — or getting hooked after doctors prescribed them pills for physical problems, Greenberg said.

And once someone is addicted, the happy chemicals the drugs produce take over their brains, Greenberg said.

“They reach a certain point where the dopamine reward basically hijacks their brain,” he said. “It’s not a choice at that point like people perceive it is.”

Often, it catches the person off guard. What was once a legal prescription to treat an injury becomes an addiction with withdrawals so unbearable, a desperate person might turn to heroin if their doctor decides to cut them off — often without referring them to addiction treatment, Greenberg said.

“I mean, I’ve heard the same story over and over: ‘I hurt my back, I went to see my doctor, they told me this was safe, this was going to help me get better,’” Greenberg said. “They end up on heroin from an addiction that started, essentially, by the medical community.”

Like Salter, Greenberg said he hopes the event will show people what’s being done about that — and what can be done.

“There’s a lot of effort that’s being done in this community to treat the problem,” he said. “We can try to judge people and blame people, but that doesn’t make the problem go away. And so while we’re busy judging and blaming, we also need to focus on what we need to do about it, which is treatment and prevention.”

Alayna Shulman covers a little bit of everything for the Record Searchlight. In particular, she loves writing about the issues of this community through long-form storytelling. Her work often centers on local crime, features and politics, and has won awards for best writing, best business coverage and best investigative reporting in the California News Publishers Association’s Better Newspapers Contest. Follow her on Twitter (@ashulman_RS), call her at 530-225-8372 and, to support her work, please subscribe. 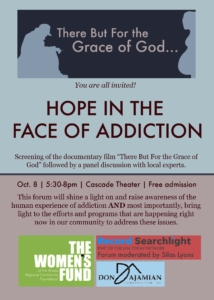